STRAP YOURSELF IN FOR MIND-BLOWING MAGIC AND HILARIOUS COMEDY ILLUSIONS! 90 minutes of astounding, spectacular, and exciting new effects that will have you on the edge of your seat as Reggie Rice takes you for an incredible ride through his wild imagination. Discover the secret as Reggie escapes his Toy Box and managed to get through TSA airport security with magic! Watch as demonstrated his transportation invention! Crack the code of the vault and even turns into some of his favorite childhood movie characters right before your eyes and guaranteed to have everyone bursting into laughter. This show is Full of foolishness and Illusions that will have your whole family Entertained and wanting more. 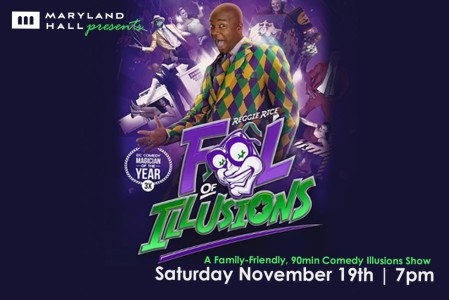 Magician Reggie Rice uses the art of illusion and comedy to teach the true power of the magic of laughter in our everyday lives. To do this the actor-comedian uses storytelling to take his audiences along on an adventure into his wild imagination. From the time Rice could walk and talk, he has enjoyed entertaining and making people laugh. He performed in every chorus concert, school play, and talent show until the age of 19. It was then that he discovered his passion for magic-after meeting the award-winning Master Magician, Geovanni Livera.Through Livera, Reggie was introduced to the International Brotherhood of Magicians at their annual convention. It was there he met and was taught by some of the world’s best magicians.It was this that prompted Reggie to make a career performing magic. From hundreds of Birthday parties to Large fairs and festivals and soon moving on to being paid top dollar doing Corporate events. Reggie would soon become a three-time D.C. Comedian Magician of the Year. He has performed five times for First Lady Michelle Obama and opened for singer Jordin Sparks. He was featured on The Travel Channel and he began performing for hundreds of thousands of people all over the world, including Kevin Hart, Ryan Seacrest, and Shaquille O’Neal. Rice has even taken his act to the high seas as a cruise ship headliner. Reggie’s foolish, energetic approach makes his show something that people of all ages have come to love as he continues to spread the magic of laughter! His full 90-minute touring theatrical production, Fool of Illusions, features a unique combination of his own grand illusions, music, audience participation, amazing magic, and hilarious comedy has people calling him truly a one-of-a-kind entertainer.

*VIP Ticket* includes Premier seating in first 10 rows, which is always the place to be at a Magic Show because it increases your chances of being called on stage during the show.

*Meet & Greet Ticket* includes the exclusive, limited availability meet & greet with Reggie at 5:45 pm. Take a behind the scenes tour with Reggie Rice and you just might learn some magical secrets! Take a picture with Reggie and his Assistants Backstage, a great keepsake for a memorable occasion.